Other than the iconic hills Yangshuo has been also a home to many Chinese Cormorant fishermen. It is an ancient and unusual tradition where people go fishing with trained cormorants.

Surrounded by spectacular Karst topography, interspersed with green meadows and winding rivers Yangshuo is a scenic county in Southern China. It is believed that the area was covered by sea for more than million years. Later due to various geological events, strong uplifts and then erosion the region got gifted with strange limestone hills. Rising sharply from the plane lands these mountains create nothing less than a fairy tale setting. As we drove from Guilin's Liangjiang airport to Yangshuo the surroundings of G65 highway welcomed us with vivid landscapes. 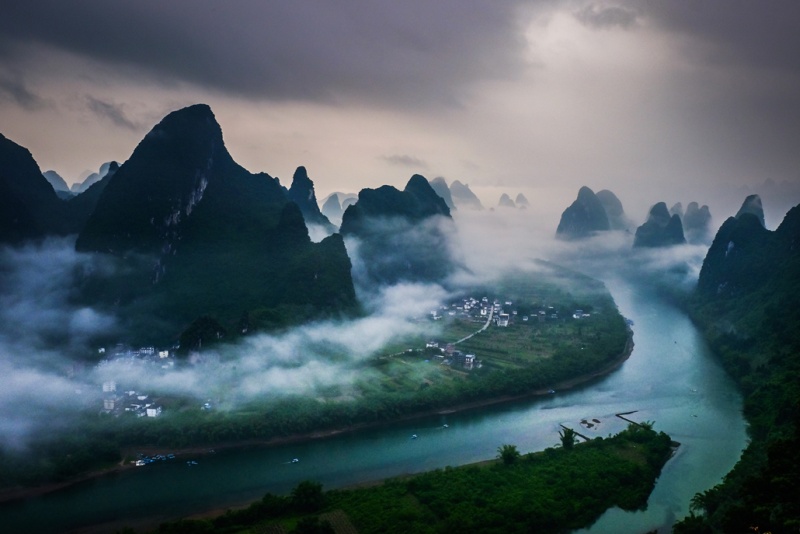 Clouds rolling over the Li River and majestic Karst mountains

Other than the iconic hills Yangshuo has been also a home to many Chinese Cormorant fishermen. It is an ancient and unusual tradition where people go fishing with trained cormorants. Cormorant fishing or 'Ukai' is believed to be originated in Japan more than 1300 years ago. Eventually it sprawled over in China as well. One can even find 'Ukai', enshrined in the old Japanese and Chinese Chronicles, paintings. 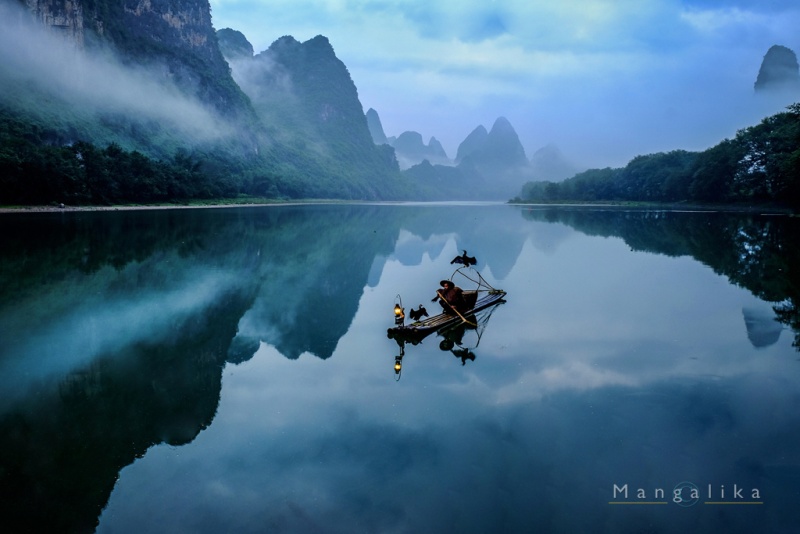 A forty minutes' drive from our Yangshuo homestay through the curly mountain roads brought us to a picturesque part of the Li River. The rainy night ended up with a misty dawn. A surreal landscape got unveiled ahead us. We noticed a fisherman, waiting at the boat while the mist hovered above him.

The cormorant fishermen stream ahead on the long bamboo rafts at wee hours or after the sun rolls down. The birds with a little snare, lightly tied around their necks, swim beside the boats. 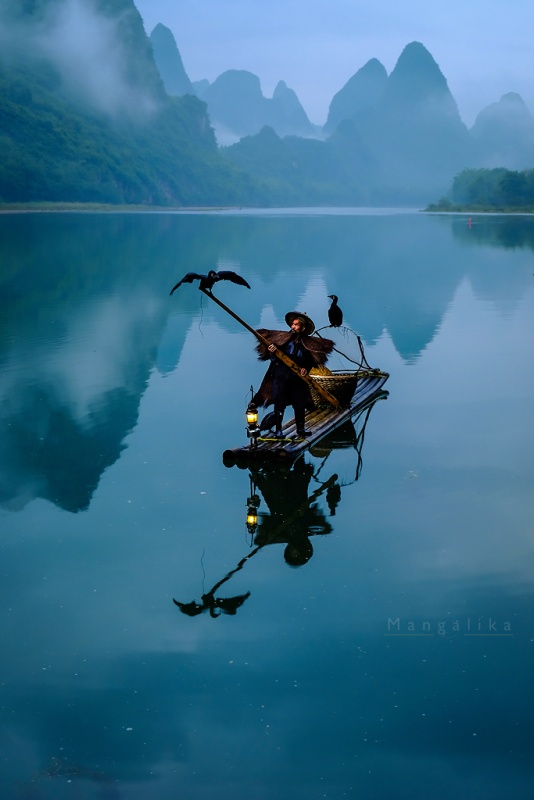 The fisherman releases the bird to dive into the water

Another important element of this entire adventure is the oil lamp, hanging at the edge of the boat. It illuminates the surrounding and also attracts sweet fishes, known as 'ayu'. When the birds make a big catch it cannot be gobbled down because of the snare. That is the time when the fishermen pull them to retrieve the fishes.

It was drizzling when we reached at Xingping with help of our local guide George. It is an ancient small town along the Li River. With grey bricks, black tiles and carved designs the old houses tucked away like some animated movies. There we met the Huang brothers. Already in their 80's they are known to be the oldest living fishermen in Yangshuo area. 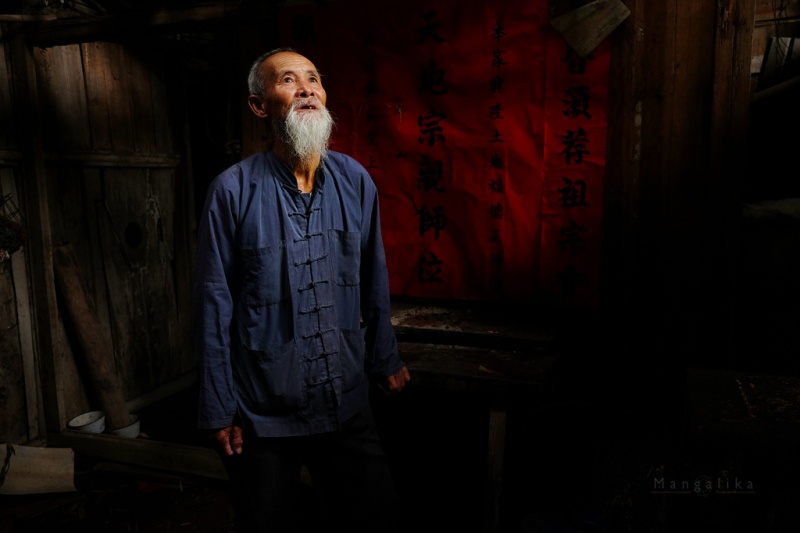 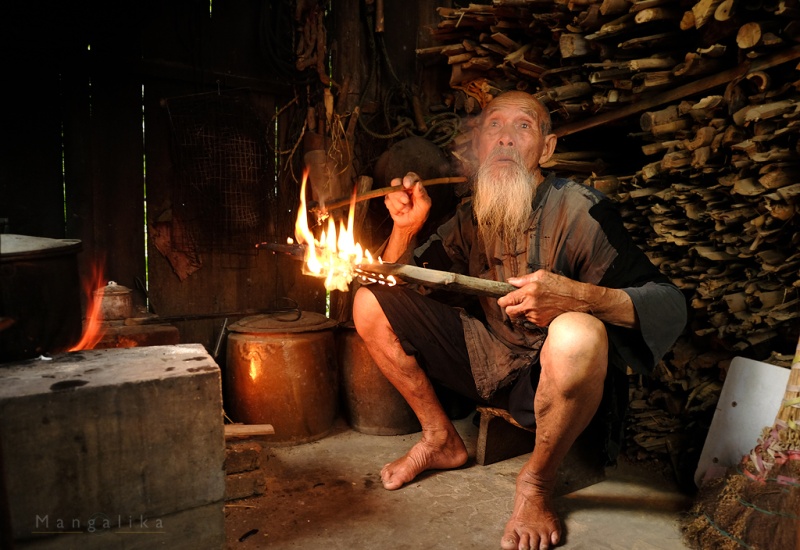 Sitting at their old rustic home by the mighty Li River, the brothers recollected that they learnt this fishing technique since teenage.

As the birds are raised since infancy they seem to build a close friendship with their masters. Both can understand each other's sign languages.

"When we cannot go fishing, we buy cut fishes from market to feed them though they prefer the freshly caught fishes", said the older brother. Looking at their three healthy pets, waiting near a perch, we could really understood that they are never neglected.

As the rain stopped the Huang brothers got ready with the traditional rain coats. It almost made them look like ancient warriors. After dragging the rafts from the back yard to the shallow river the masters started their voyage with the excited pets. 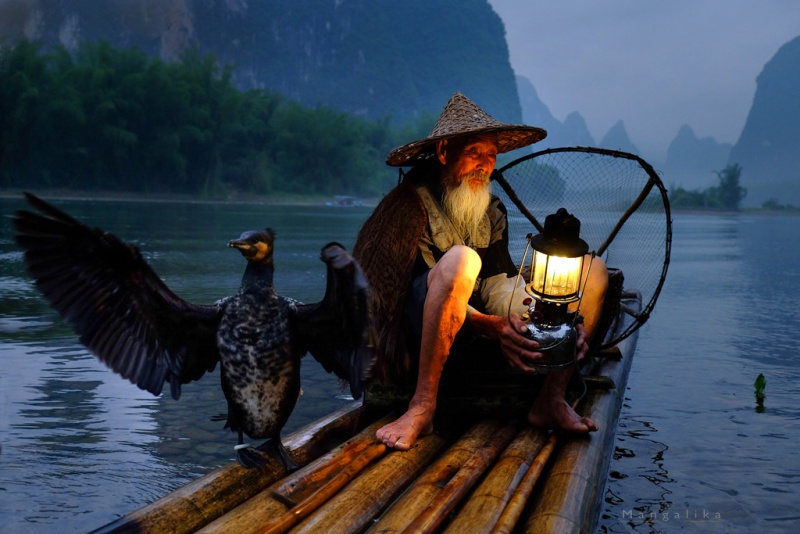 "Now-a-days not many people are practicing actual cormorant fishing due to huge competition in the market. People with large nets and boats can easily beat the men with birds", the elder brother explained as he sat across the bamboo deck. 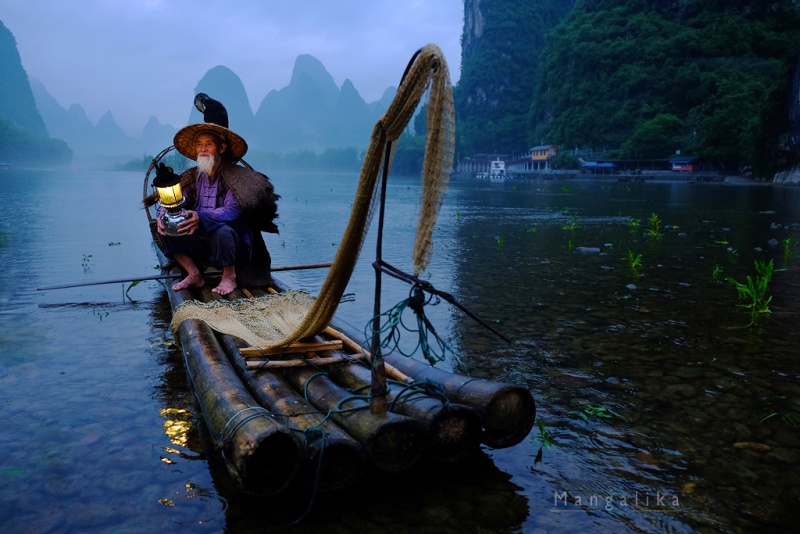 However, since few decades the tourism industry started boosting the endurance of such fishing community. Some of the remaining few fishermen of Yangshuo have joined the nightly cormorant fishing show, organized by different travel groups. Also some folks during their daily fishing trips pursue making personal deals with the flocking tourists to show their fishing style.

Evening mist was floating along the river, often covering the distant bamboo forests and karst peaks. With some other fishermen, the Huang brothers went ahead with slow-moving rafts while their oil lanterns illuminated a little part of the valley. We witnessed a magical blue hour in Xingping which seemed taken straight out of the Chinese scroll paintings.

A Tale of Soil and Silver